The AMD 29000 is another load-store CPU descended from the Berkeley RISC design (and the IBM 801 project), as a modern successor to the earlier 2900 bitslice series (see picture here) (beginning around 1981). Like the SPARC design that was introduced shortly later, the 29000 has a large set of registers split into local and global sets. But though it was introduced before the SPARC, it has a more elegant method of register management.

The 29000 has 64 global registers, in comparison to the SPARC's eight. In addition, the 29000 allows variable sized windows allocated from the 128 register stack cache. The current window or stack frame is indicated by a stack pointer (a modern version of the ISAR register in the Fairchild F8 CPU), a pointer to the caller's frame is stored in the current frame, like in an ordinary stack (directly supporting stack languages like C, a CISC-like philosophy). Spills and fills occur only at the ends of the cache, and registers are saved/loaded from the memory stack. This allows variable window sizes, from 1 to 128 registers. This flexibility, plus the large set of global registers, makes register allocation easier than in SPARC (optimised stack operations also make it ideal for stack-oriented interpreted languages such as PostScript, making it popular as a laser printer controller).

There is no special condition code register - any general register is used instead, allowing several condition codes to be retained, though this sometimes makes code more complex. An instruction prefetch buffer (using burst mode) ensures a steady instruction stream. Branches to another stream can cause a delay, so the first four new instructions are cached - next time a cached branch (up to sixteen) is taken, the cache supplies instructions during the initial memory access delay. 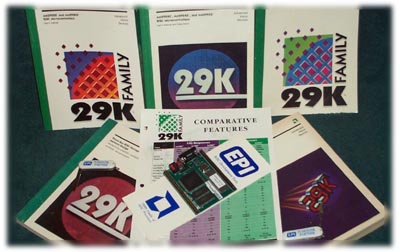 Registers aren't saved during interrupts, allowing the interrupt routine to determine whether the overhead is worthwhile. In addition, a form of register access control is provided. All registers can be protected, in blocks of 4, from access. These features make the 29000 useful for embedded applications, which is where most of these processors are used, allowing it at one point to claim the title of 'the most popular RISC processor'. The 29000 also includes an MMU and support for the 29027 FPU. The superscalar 29050 version in 1990 integrated a redesigned FPU (4 instructions could be dispatched to execute out of order and speculatively).

In late 1995 Advanced Micro Devices dropped development of the 29K in favour of its more profitable clones of Intel 80x86 processors, while Intel tried to replace the x86 with an architecture similar to the 29K, although much of the development of the superscalar core for a new AMD 29000 (including FPU designs from the 29050) was shared with the 'K5' (1995) Pentium compatible processor (the 'K5' translates 80x86 instructions to RISC-like instructions, and dispatches up to five at once to two integer units, one FPU, a branch and a load/store unit).

The AMD 29K series of 32 bit microprocessors were designed to directly compete with the Intel 80960 and Motorola MC68020/030. They are faster at most operations (clock for clock) then the competition and were extensively used. There were many variations of the architecture (including a 16bit MCU and FPU). This, like the 80960, makes collecting difficult. Below is a comprehensive guide to the differences in these CPUs. The 29050 is the direct predecessor or the K5 x86 CPU. The K5 translates x86 into RISC 29k instructions.

3-Bus Microprocessors
29K 3-bus microprocessors included the 29000, 29005 and 29050. They have seperate buses for data, addresses and instructions. All three of these CPUs are pin compatible and are 5 Volt devices. The 29005 was the value chip with the 29050 being the premier microporcessor. Thee 29050 possed a very capable FPU. It was a VERY capable processor and is still in wide use today.

2-Bus Microprocessors
These processors have a combined Instruction and Data bus. They are a bit more flexible then the 3-bus architectur in that they have scalable clocking, scalable bus sizing and full JTAG support. The 29035 is the value model and the 29040 is the performance model, available with speeds of up to 50MHz. The 29040 has a hardware multiply (integer) unit but lacks a FPU. Back to Top

Microcontrollers
AMD also made many Microcontrollers based on the 29K design, they vary widely in what features (and to what extent) they provide. However, as with all microcontrollers they include I/O control, ROM control and about everything needed to interface to a system. As a system designer this gives you the ability to choose the features you need while still conserving pin counts and power dissipation.
Back to Top


Additional 29K Devices and Support
AMD made an external FPU (actually an arithmetic accelerator) for the 29K but it was quickly superceded by the onboard FPU of the 29050. The 2911x series of microcontrollers is unrelated to the normal 29k family but is interesting none the less, if anything for the remarkable package it came in.

AMD discontinued the 29K series completely in 1995. This is most likely due to the development of the K5 and K6 processors. There were some issues with discontinuing the 29K as many were being used in mission critical fields (aviation mainly). To avoid hasseling with the FAA and having to provide support for a product they no longer were going to make, AMD sold the 29050 design to Honeywell, a well known aerospace and defense company.

Honeywell used and still uses the 29050 (implemented in an ASIC) in its Versatile Integrated Avionics package (known as a VIA). The VIA is responible for data logging, data display, and control of many subsystems on an aircraft. Each section (Core Proccessing Module - CPM) of a VIA implements a pair of 29050s (HI-29KII as they are known at Honeywell). The CPUs are setup in a system known as voting. All outputs (address, data and control) are ran through a comparator, if each CPU sends out the same signals then the system continues. if the signals do NOT match then there is a fault, and the sytem enters an error mode where it logs the error, and attempts to recover. This is a very common set-up on a mission critical device such as flight computers.

Currently the following planes implement a VIA using the 29050: 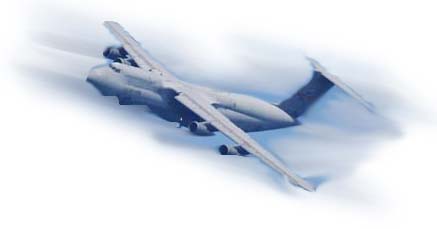 If you know of any more 29k info etc. Please e-mail me and I will add it.

Thanks to R. Brians of Epsilon Industries for providing much of my 29K material.